What’s On Your DVD Shelf?

Media formats, much like M*A*S*H’s Col. Flagg, come and go like the wind. From nitrate film to laser disc to video tape, Betamax to VHS, DVD to Blu-Ray to an iTunes purchase floating in the cloud of bits and bytes to … a chip implanted under the skin of your neck on the day of your birth, or whatever’s next. And with each change, cinema wonks have had to search their souls and decide: are any of the films I liked enough to purchase in a now-outdated format worth buying all over again in a new format? 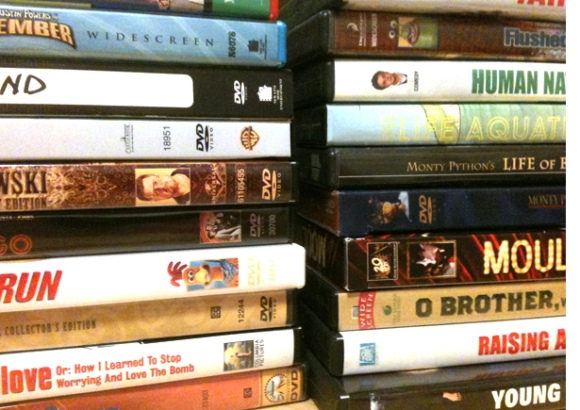 The DVD format still has many charms for me. Since my movie memories include the age of VHS, DVDs combine the best of that experience (the joy of being able to to watch your chosen flick whenever you like) minus the hassles (no room for much except one feature film, plus the likelihood of your player going haywire and chewing up your media). And as hopelessly hooked as I am on Netflix on-demand, they’re stingy with the “making-of”s and other extras that can add so much to the pleasure of a film that intrigues you.

So here are the contents of my DVD shelf, and what the future holds for each of them, in three categories:

Must-haves: I want to have a copy of these in all future formats, or guaranteed access to these on-demand, in perpetuity, world without end:

Special category:
Some DVDs will stay in my collection because they’re gifts from important people in my life. My oldest friend gave me Sixteen Candles and Fast Times at Ridgemont High for my 40th birthday. Only another Gen-Xer could understand fully why I dissolved into delighted hysterics when I opened the package. And my dear husband gave me Ghost World (the “tampon-in-a-teacup” scene could have come straight from my freshman Design I class in the fall of 1984 at KU.) And Strictly Background, the small gem directed by Jason Connell, a fellow Okie with an eye for quirk.

So, fellow wonks, what formats are you favoring these days? Which of your favorite flicks are worth buying in newer formats, and which are staying in the dustbin of cinematic history? Feel free to send me your lists, or a photo.

Have Yourself A Little “Arthur Christmas”

How’s your December been so far? Mine’s been a mixed bag, to put it mildly. First some minor car trouble. Then a head cold for the hubby and sinusitis for me. Followed by a spike in “crappier-than-thou” behavior that seemed to crop up everywhere, from national politics to the workplace to our weekday commutes. All pesky, but nothing we couldn’t handle. Then the news from Sandy Hook Elementary. Followed by a string of local almost-copycat incidents, ranging from the wretchedly immature to the truly frightening. What is there to do, except spend some extra time with loved ones, put some change in the bell-ringer’s bucket, and re-read Longfellow’s “Christmas Bells” several times, hoping that that last verse is true?

Well, try giving yourself a holiday gift by putting “Arthur Christmas” into your DVD player, or your online movie queue. It’s inventive, funny, sweet and beautifully made.

For me, it provided a refreshing break from a weary month that seemed beset by a bizarre trio of luchadores: Shrieking Commercialism, Contrived Sentiment and True-Life Horror. Why “Arthur Christmas” is not more widely known mystifies me. Here’s some of what it packs into a mere hour and 40 minutes: an immensely detailed concept of how Santa Claus’ massive enterprise works, with glimpses into its past; a goofball pair of Christmas slippers; and a sly and affectionate portrait of three generations of a decidedly imperfect family. All delivered with Aardman Animations’ unique approach: less treacle than Disney/Pixar/DreamWorks, with every bit as much real humor and originality.

Fellow wonks, I think movies are powerful. Whether a flick is great, so-so or awful, when it’s viewed at the right time by the right audience (whether that audience is one person, or a crowd), it can inspire change. So I wish I could tell you that “Arthur Christmas” has the ability to make all the misguided in this world straighten up, fix whatever messes they’ve made, and start treating other human beings decently. But even the most ardent believer in the power of cinema would be wrong to make those claims. So it’s more in the spirit of lighting a candle instead of cursing the darkness that I’ll be reaching for my DVD shelf, to move “Elf” and “Polar Express” (whose animation style is starting to look slightly more creepy with each passing year) to make room for “Arthur Christmas”. Hope whatever winter holiday(s) you celebrate(d) is/are (a) good one(s) for you, and here’s to 2013.

P.S. The song that provides the basis for the title of this entry was written by Ralph Blane, a fellow Okie. It’s one of my favorites, especially the versions that don’t shy away from that last verse: “If the Fates allow … Until then we’ll have to muddle through somehow.” Doesn’t get much realer than that.